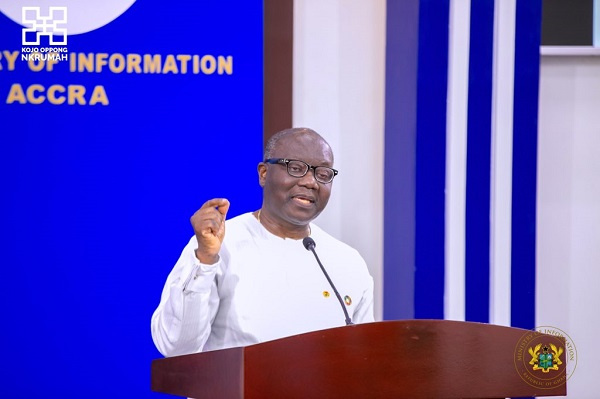 Finance Minister Ken Ofori-Atta after the introduction of the Electronic Transfer Levy (E-Levy) made no statement…on Ghana’s economy, despite recent hikes in transport tariffs , the price of foodstuffs and the price of petroleum products.

At a press conference on the upcoming annual meeting of the African Development Bank Group to be hosted by Ghana, the Minister of Finance spoke about current events in the economy following questions from journalists.

Here are the 4 main points the Minister addressed regarding current events in the economy, including the collateralisation of E-Levy and the listing of Agyapa royalties on the London Stock Exchange.

He said the Government of Ghana was putting in place measures on its own to ensure that it comes out of the current economic challenges. He said the cost-cutting measures put in place have started to show positive results.

He further said that most of the measures to increase government revenue are upstream, adding that the government will soon start property tax collection.

Ofori-Atta said the International Monetary Fund (IMF) will even reject Ghana’s bailout request as it knows Ghana is heading in the right direction. He, however, indicated that Ghana would only go to the IMF for advice.

“We are committed not to return to the fund because, in terms of interventions and policy, we are there, the fund knows that we are completely in the right direction. The challenge is to validate the programs that we have put in place and then, in my opinion, accompany us to find alternative means of financing or refinancing our debt, by re-profiling it”, he declared.

On the recent rise in prices of goods and services and the demand from some Ghanaians for the introduction of price control mechanisms by the government, Ofori-Atta said price controls were not an option.

Ghana’s Statistical Services announced on Wednesday that inflation had risen to 23%, fuel prices had also risen, with diesel currently selling at 11.24 GH¢, and transport tariffs had also risen by 20 %.

On the claims made by some Ghanaians that the E-Levy will be secured, the Minister of Finance has not completely refuted the claims.

Ofori-Atta said collateralizations are generally bad. He said the government will make the right decision when the time comes.

“I can’t guarantee you that E Levy won’t be guaranteed. The point is you know collateral is bad. Insurance is where the economy is going, where are the instruments we have in our basket and how are we going to deploy them to us. Unless you’re adamant and know something that I don’t know, but collateralization is bad. So I won’t give you assurance. I’m going every moment to examine what we we have and make a decision with cabinet as to how best to use our resources as a country,” he said.

Roads Minister Kwesi Amoako-Attah has previously said the government will use proceeds from the E-Levy for loans, claims that have been reiterated by members of the opposition Democratic National Congress.

Furthermore, Ofori-Atta did not refute reports that the Agyapa Royalties deal will be listed on the London Stock Exchange, even though it has not been approved by Parliament.

He said going public is in the interest of the country.

“Therefore, the question is not whether the monetization of mining royalties or the listing of the company is good or bad,” he added.

Watch the latest episode of The Lowdown below:

Every Ghanaian has a role to play in reviving the economy