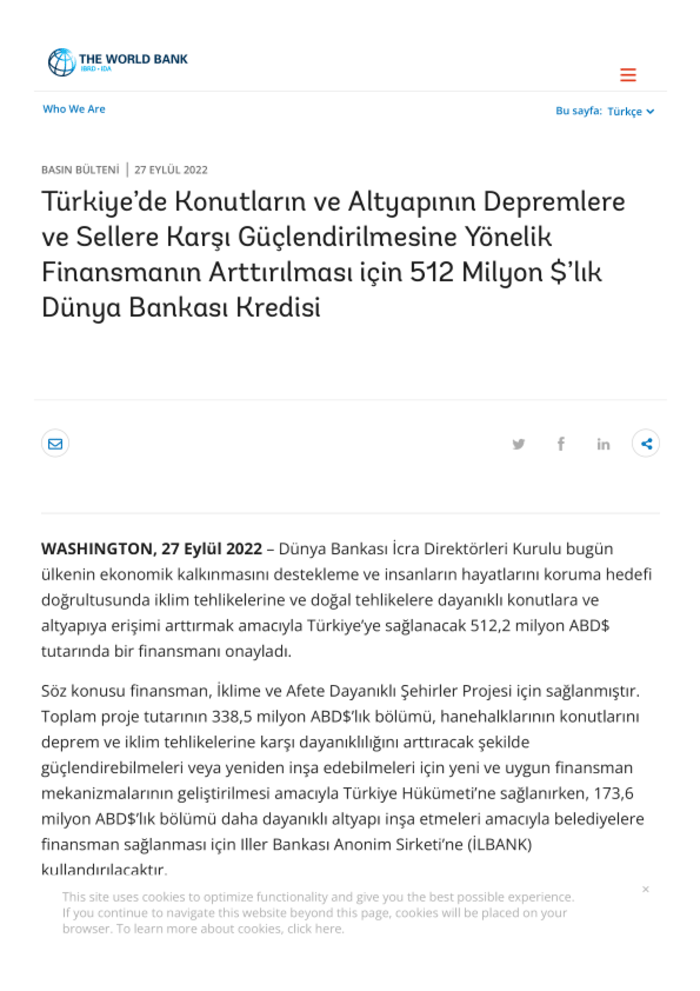 $512 million loan from the World Bank to extend financing for the strengthening of houses, infrastructure against earthquakes and floods in Turkey [EN/TR] – Turkey

WASHINGTON, September 27, 2022— The World Bank’s Board of Directors today approved $512.2 million in financing for Türkiye to expand access to climate- and hazard-resilient housing and infrastructure, with the aim of save lives and support the country’s economic development.

The funding is for the Climate and Disaster Resilient Cities Project. Of the total project amount, $338.5 million will go to the Government of Türkiye to develop new affordable financing mechanisms for households to retrofit or rebuild their homes to increase resilience to seismic and climate hazards, while $173.6 million will go to Iller Bankasi Anonim Sirketi (ILBANK), to provide funding to municipalities to build more resilient infrastructure.

More than one million people will benefit from improved infrastructure and 32,000 people will benefit from loans to rebuild or modernize their at-risk housing. The project will focus on urban areas in the provinces of Istanbul, Izmir, Kahramanmaras, Manisa and Tekirdag, which are highly vulnerable to seismic and climatic hazards. These provinces also include the largest urban areas of Türkiye where 76% of the country’s 85 million people live and where much of the country’s economic activity is concentrated.

“Turkey is particularly vulnerable to natural and climatic hazards, which exact a heavy toll on the country’s population and economy. With this project, the World Bank is pleased to make an important contribution to safeguarding Turkey’s development progress and supporting its transition to a resilient and climate-proof future,” said Carolina Sanchez-Paramo, World Bank Acting Director for Turkey

Located on several active fault lines, Turkey is one of the most earthquake-prone countries in the world. Earthquakes have caused the greatest human and economic losses in the past 20 years, mainly due to building damage and collapse. Meanwhile, extreme weather events and flooding have increased in frequency and intensity. Last year alone, flooding left at least 81 people dead, around 2,500 evacuated and major damage to more than 450 buildings.

An estimated 6.7 million residential buildings across the country require earthquake-resistant retrofitting or reconstruction. These structures were built before the introduction in 2000 of modern building codes for seismic resistance. Most earthquake deaths are attributed to the structural failure of these older residential buildings.

Climate-proof housing and infrastructure are also essential for Turkey to sustain its economic growth while meeting its climate change and environmental sustainability commitments. The construction sector in Turkey accounts for around 12% of the country’s greenhouse gas (GHG) emissions.

“Urban transformation against seismic and climate hazards will require significant investments at all levels of government and in the private sector, including households. This project responds to the main challenges of greater financial accessibility of the renovation or demolition and reconstruction of at-risk housing and the mobilization of available resources and the mobilization of financing for municipalities in order to increase investments. in resilient infrastructures”, said Zoe Trohanis, a die World Bank Task Team Leaders.

The main components of the project include:

The World Bank is an important and reliable partner for Turkey in disaster risk management, urban development and energy efficiency. Other World Bank projects implemented in recent years include the Seismic Resilience and Energy Efficiency in Public Buildings Project; Istanbul Seismic Risk Mitigation and Emergency Preparedness Project; the Safe Schools project funded by the Facility for Refugees in Turkey; the Disaster Risk Management in Schools project; the Small and Medium Enterprise Energy Efficiency Project; and the energy efficiency project in public buildings, among others.