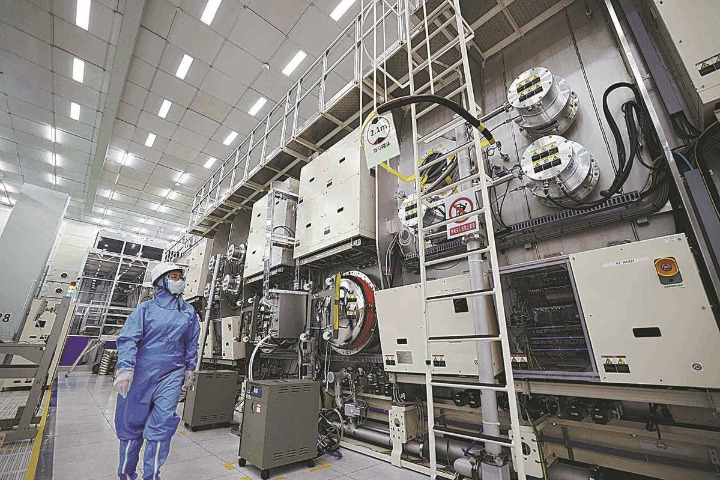 BOE is pinning its hopes on cutting-edge smart technology

BOE Technology Group Co Ltd, a leading Chinese display supplier, is doubling down on the smart manufacturing segment and will increase investment in core and future-oriented technologies as the company aims leverage advanced digital technologies to accelerate the digital transformation of traditional businesses.

The company’s plant in Fuzhou, Fujian Province, which mainly produces high-end and super-large display panels, has been included in the World Economic Forum‘s Global Lighthouse Network, a community of global manufacturers who are using fourth industrial revolution technologies, such as artificial intelligence, cloud computing and big data to enable growth. BOE is the first and only display company in the Chinese mainland to be listed as a flagship factory.

Liu Wenrui, vice president of BOE and general manager of BOE’s Fuzhou plant, said that it has adopted digital technologies and advanced analyzes in a fully automated production system, with production costs reduced by 34% and production up 33%.

Based on rich experience in intelligent manufacturing capabilities, BOE has established an industrial Internet platform, which provides digital transformation services to 200 enterprises across the country and helps them improve their productivity by approximately 30%, Si said.

The platform is expected to improve the level of smart manufacturing and digitalization along the upstream and downstream segments of industrial chains, according to the company.

The Industrial Internet, a new type of manufacturing automation that combines advanced machinery, Internet-connected sensors and big data analytics, will boost productivity and reduce the costs of industrial production.

Statistics from the Ministry of Industry and Information Technology showed that China has cultivated 150 large-scale industrial Internet platforms, with more than 78 million units of industrial equipment connected to the platforms.

“The burgeoning Industrial Internet will see an increasing demand for precision in data acquisition, transmission speed, storage space, computing capabilities and intelligent applications, thus driving the development of an infrastructure of big data and cloud computing and fostering a batch of industrial Internet companies with global competitiveness,” said Liu Xiangdong, a researcher at the China Center for International Economic Exchanges.

The industrial Internet has become a new engine for the growth of the digital economy and has shown remarkable development potential, Liu added.

According to statistics from Sigmaintell Consulting, a Beijing-based market research firm, BOE led the domestic market with flexible OLED panel shipments of around 60 million units in 2021, up nearly 60% from 2021. year on year, making it the second largest in the world. OLED manufacturer next to South Korean Samsung.

Li Yaqin, general manager of Sigmaintell, said the demand for flexible OLED panels used in foldable smartphones will continue to increase this year thanks to the commercial application of 5G technology, and panel makers are expected to further improve their capabilities. rate of return and reduce production costs.

Flexible OLED panels will gain popularity in mid-range smartphones that will cost more than 2,500 yuan by 2025, Li said.