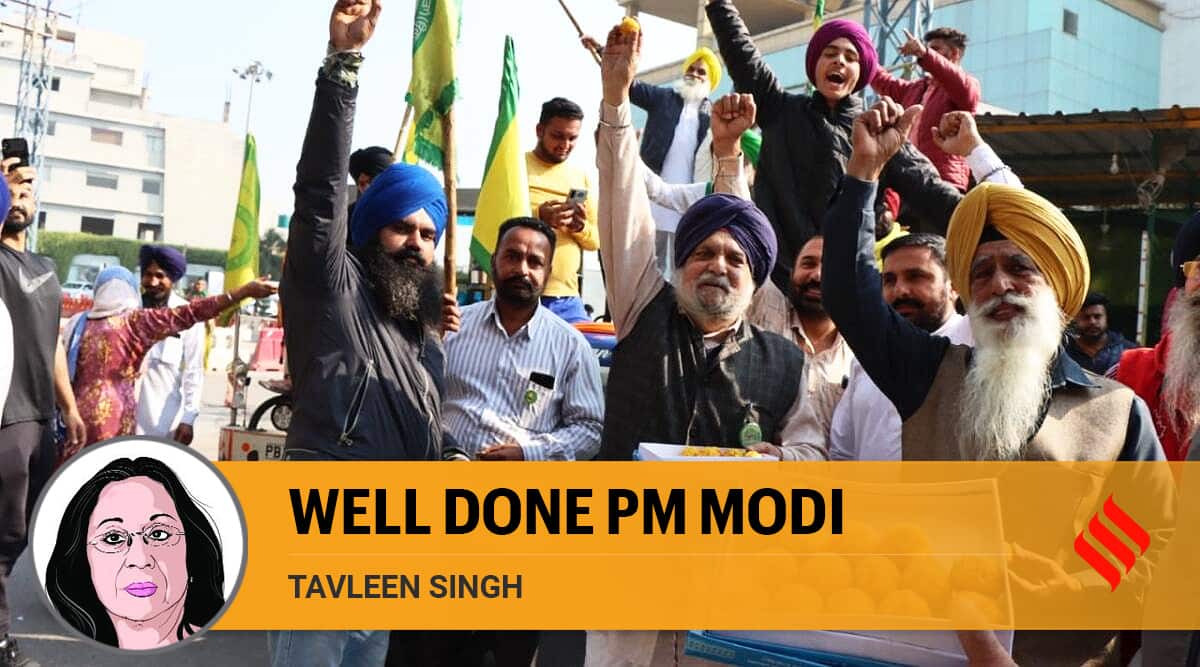 For a powerful prime minister, being humble in publicly acknowledging a mistake is a good time for India

In the end, it was not about farm laws but about democracy and the right to protest. Democracy won. The most powerful prime minister India has seen for more than three decades bow to the people’s wishes last week when he announced the repeal of the three farm laws. Those who think that by repealing these laws, Narendra Modi reversed the necessary agricultural reforms, are mistaken. If farmers were willing to risk their lives to protest laws they believed left them at the mercy of corporations, then the reforms were pointless. When announcing their repeal, the Prime Minister said farmers would be consulted when his government launches future reforms. Its good.

There is no doubt that agricultural reforms are needed. It was the way in which these three laws were passed by Parliament that resulted in a breach of trust between the government and the people, who he said would benefit. On top of that, there have been ugly attempts to prevent protesting farmers from reaching Delhi and uglier attempts to slander people desperate enough to go through seasons of heat, rain and extreme cold in the open. to assert their point of view. Modi must take personal responsibility for the malignant campaign. It was his decision not to meet those protesting at the Delhi borders and his decision to mock them as professional protesters by declaring them “andolanjeevis” in Parliament.

Long before this inopportune commentary, his army of social media trolls, blind followers and sycophants had started shouting about the Khalistanis and “anti-nationals” infiltrating the protest. To seriously believe that Greta Thunberg and Rihanna were in cahoots with the Khalistan movement is in serious need of a head exam, but until last week many who should know better believed it.

Will they know better in the future? Will they abandon bootlicking for a real analysis? Maybe not. But, it is probably time for the Prime Minister to admit that his followers have done more damage to his image than his worst detractors. They did this by spending most of their waking hours spreading hatred and venom, and this is what led Modi to be seen as a man who divided Indian communities. And not like the reformer he would like to be. For some time now, he has made it clear that what he really wants is for India to walk faster on the path to prosperity, and not continue the hate agenda that has come to define Hindutva. . But, if he conveyed this message to his devotees, they still show no sign.

Before he announced the repeal of the three farm laws, people had already noticed that he was trying to change the agenda. Those who have the sad task of being forced to spend more time than necessary in government offices report that in recent weeks they have started to notice that ministers responsible for the economy have suddenly been eager to hear suggestions. on how they could make the economy move faster. The Prime Minister himself is said to have complained in private that he does not understand why businessmen have to deal with so many “conformities”. If these were the things his followers and the BJP’s army of social media trolls were pointing out, the man they see as India’s savior might not have had such a hard time convincing his critics. that he strives to improve the life of the average Indian. And, more importantly, that he believes democracy should be cherished not only during elections, but after they have been won.

When he announced the repeal of farm laws last week, many of his most devoted followers seemed visibly confused and clearly mute, as the much weaker social media army that backs Rahul Gandhi openly gloated. They posted video clips of their hero saying the government would ultimately be forced to repeal farm laws. By doing this, they showed that they did not understand that at this time they needed to be gracious, not to gloat. That a powerful prime minister has shown humility to publicly acknowledge a mistake is a good time for India.

The farmers got it and celebrated by handing out candy at their protest site. When asked by reporters why they were so happy, they admitted on camera that they thought the repeal of the hated laws was a victory for them and a justification for their long protest. They had the grace to say that if the Prime Minister came to share the candy with them, he would be welcome. They seem to have understood better than critical critics and political experts that it is a good day for India and a great day for Indian democracy.

It was a good day for Modi. He showed he was a bigger man than people thought. He has shown that he is ready to recognize that the will of the people is greater than the will of the most powerful political leaders. For now, it is not about agricultural reform but about celebrating the strength of Indian democracy. This columnist is among Modi’s sharpest critics, but what he did last week has restored some of the confidence I once had in him.

Opening of a manufacturing meeting in China

Soundexchange – Head of Industry Engagement (US)

Emerging markets: a constructive 2022 in sight

Civil Society and the Question of Palestine – NGO Action News – 13…

Gig Economy Principles Are Adopted By Businesses To Combat Burnout