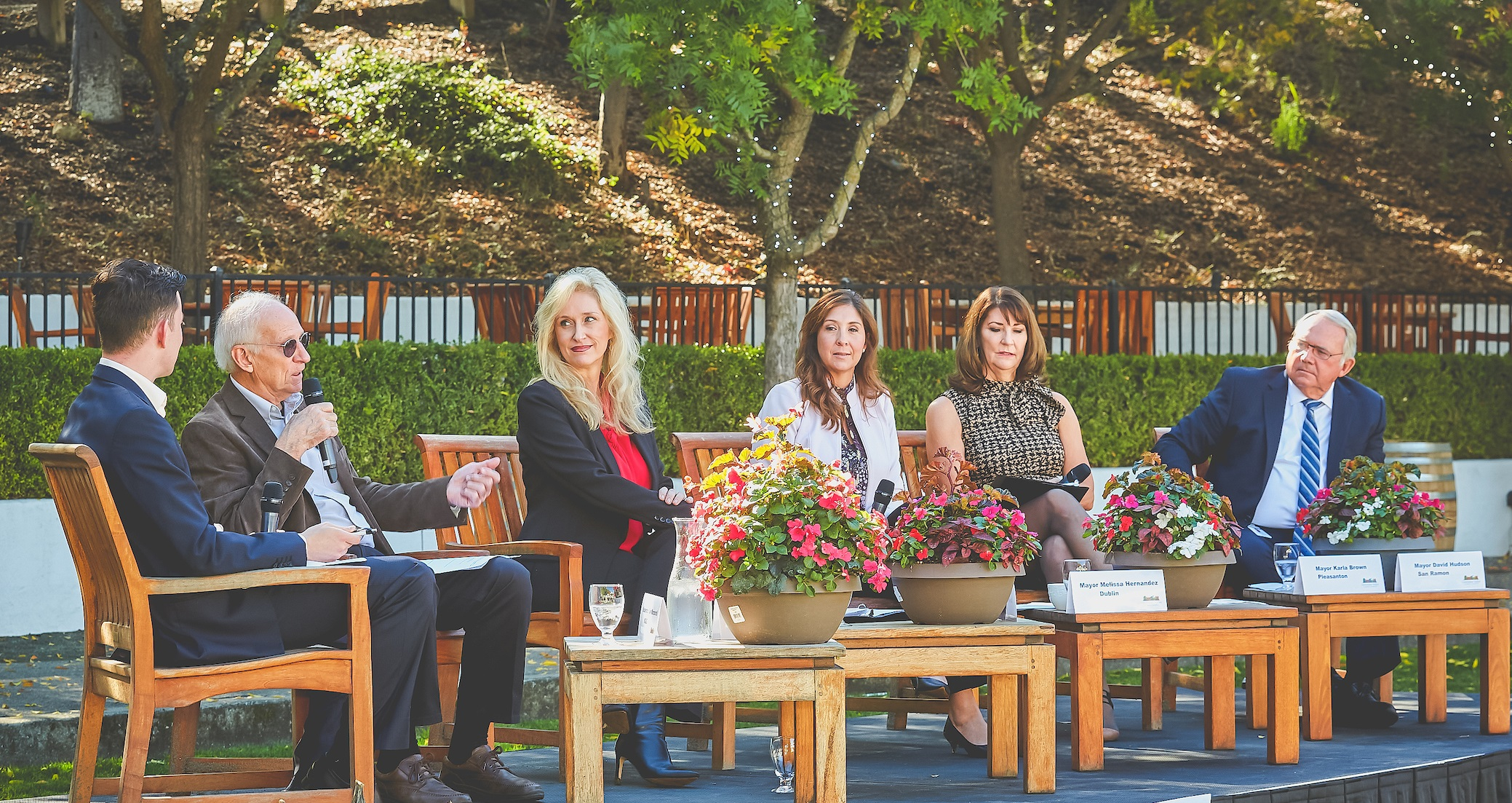 The five mayors of the Tri-Valley gathered on Thursday for their annual summit of mayors where they discussed individual and collaborative projects underway in the region as well as their visions for the future.

Hosted by the Livermore Valley Chamber of Commerce, the summit was held in person for the first time since the start of the pandemic.

The event was the first for the five current mayors reunited as Bob Woerner of Livermore, Melissa Hernandez of Dublin and Karla Brown of Pleasanton are all new to the role, having been elected in 2020, while Dave Hudson of San Ramon and Renee Morgan of Danville have served as mayors of their respective communities in previous years.

The conversation – moderated by Guy Marzorati of KQED – covered a variety of topics including pandemic recovery, housing, employment and redistribution, among others.

Morgan was the first to answer one of the main questions about the economic impact of the pandemic. In her response, she pointed out that the shift to conducting business and town meetings has practically pushed Danville “into the future”.

“With Zoom, I was able to be more productive, attend so many meetings online with fewer miles on the road, fewer greenhouse gas emissions and so much more,” Morgan said.

She also said that overall, the city has seen a slight increase in civic engagement from the community, and as a result, the city plans to move their meetings to a hybrid in-person and virtual model beyond the pandemic.

In response to the same question, Hernandez pointed out that Dublin is in “excellent financial shape” as a city, which she attributed to “so many years of being tax conservative” as well as having ” great leadership ‘in the councils of the past and present.

The mayors also touched on the initiatives they have launched to help businesses recover in their respective communities and the region as a whole, including their work with Visit Tri-Valley to encourage small and local purchases in the five communities.

“I’ll speak for all five cities; we’re here, we’re easy to reach,” Brown said, addressing business owners and residents in the audience. “If you are having difficulty, give us a call and we are here to help.”

Hudson echoed Brown’s comments, also noting that he is very proud of San Ramon’s enhanced dining-at-home program which has helped support seniors throughout the pandemic. “We have gone from a meals-on-wheels program that was virtually non-existent to providing 43,000 meals to seniors,” he said.

Woerner’s response spoke of the resilience of Livermore’s business community. “In the city center, we lost 11 businesses but gained 13, we lost a number of jobs but gained more,” Woerner said, adding that the sales tax had also recovered after having suffered a major blow earlier in the pandemic.

Woerner said housing will be the area where the city will experience the most change, with prices rising, especially as suburban areas with more open spaces and larger homes have become more attractive to families who are spent working from home.

“Prices have gone up in Livermore, now the average is over $ 1 million and that’s a 25% increase,” Woerner said. He also noted that the current housing crisis has prompted more emphasis on affordable housing.

When asked about their collaborative efforts as a region, the five mayors agreed that the Valley Link commuter light rail system is a priority moving forward.

“The five of us got together and said the priority was Valley Link, and we were going back to Washington DC to get the money,” Hudson said, adding improvements to Interstate 680 as another example.

Valley Link is proposing to add seven new light rail passenger service stations along a 42 mile corridor between East Dublin-Pleasanton BART station and the planned Altamont Corridor Express North Lathrop station. Once in service, Valley Link will provide 74 daily round trips and is expected to carry more than 33,000 daily passengers by 2040.

“Valley Link has to start; it cannot be on the back burner. It has to be the priority for this decade,” Hudson said, followed by applause.

The collaboration between the five communities returned during a discussion of redistribution, a 10-year process in which local, state and federal governments use new data from the 2020 census to redraw their district boundaries to reflect how local people have changed.

“We’re stronger in numbers, we’re stronger when we’re together,” Morgan said. “Our greatest gift is the partnership we share as Alameda County and Contra Costa County.”

Referring to recent draft maps from the California Citizens Redistricting Commission which indicate that parts of the Tri-Valley could be divided into different districts, Morgan said she did not want the area to be separated.

“I would hate to see all of us as a collaborative group – of the mayors of Tri-Valley and the Tri-Valley region – to go our separate ways and not have this partnership,” she said.

Hudson, Woerner, Brown and Hernandez all echoed similar sentiments, expressing a desire to keep the Tri-Valley together.

The mayors closed the approximately hour-long conversation with a discussion of their long-term visions, including the Innovation Tri-Valley 2040 vision plan, which is a proposed plan to expand and accelerate economic growth in the region.

While there is no formal action on the vision plan yet, Hudson cited climate change as one of the main areas of focus for the region. He also said he wanted to organize a retreat in San Ramon dedicated to reinventing the community.

Woerner mentioned the ongoing update process of Livermore’s overall plan, Morgan reiterated Danville’s efforts to prioritize more virtual and digital options to engage the community, and Hernandez highlighted reinvestment in existing facilities and infrastructure. of Dublin and is moving towards a greener turn.

Brown spoke about expanding broadband throughout the city of Pleasanton to improve telecommunications and continue to support the collaboration with city hospitals, Sutter Health and Stanford Health Care-ValleyCare. She cited the thousands of COVID-19 vaccines that have been distributed at the Alameda County Fairgrounds as a successful example of the partnership.